Whats in the package.

The Wotofo Skuare 6000 comes in a choice of two packages. One pack that comes with a charged 18650 battery, and one that doesnt.  Please note that you will need an 18650 battery to run this pod, as there is no internal battery.  Its good that you get the choice, and affectively once you have purchase one of the kits, that includes the battery, you can then just buy the standard kit. 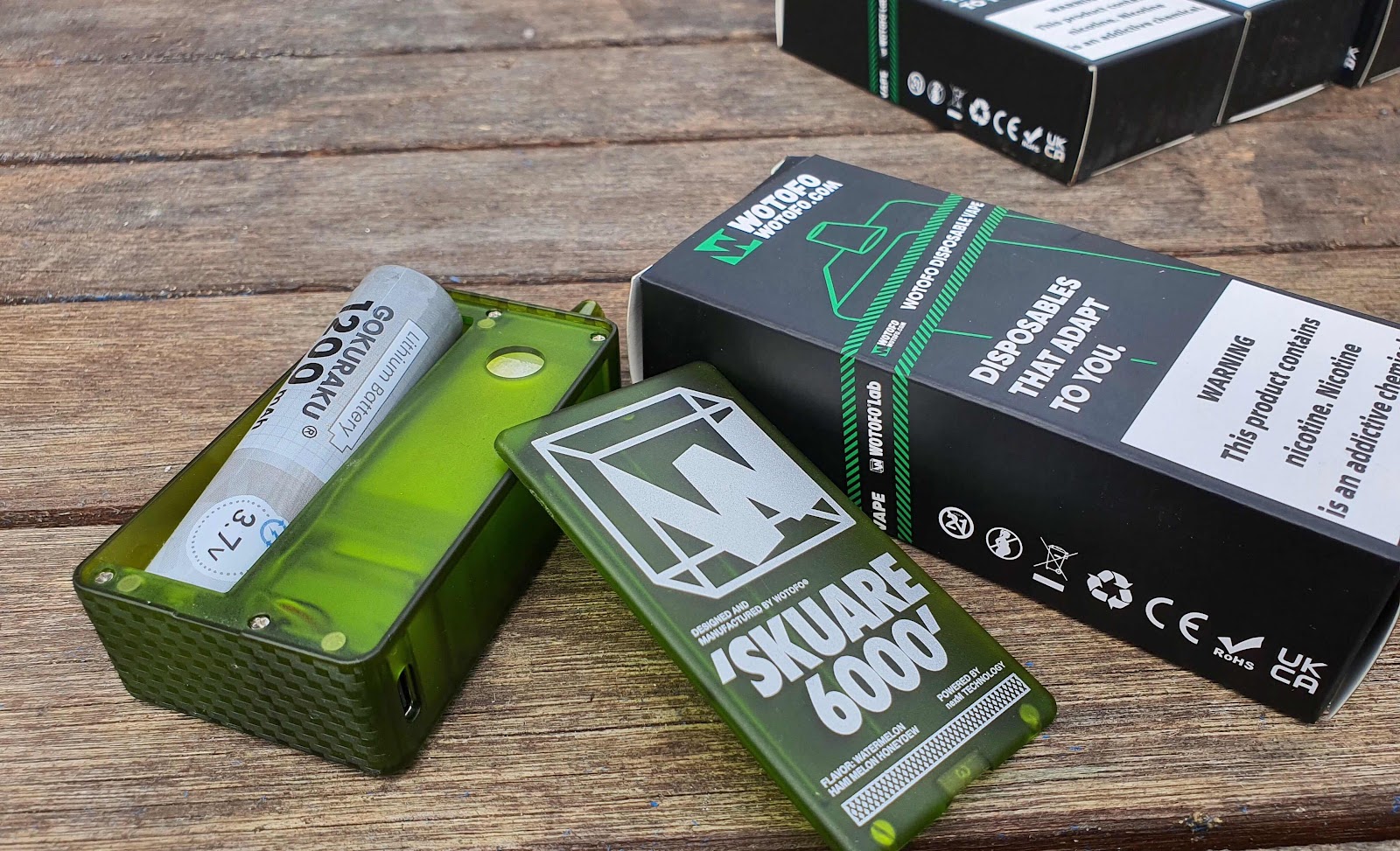 As well as a choice of flavours, it also comes in a choice of 6 vivid colours, also neon by design.

The stated ‘Steampunk’ design and branding might not be to everyone. Wotofo have always like to cover their products in there own branding. bugger the better.  Personally i don’t really mind it. 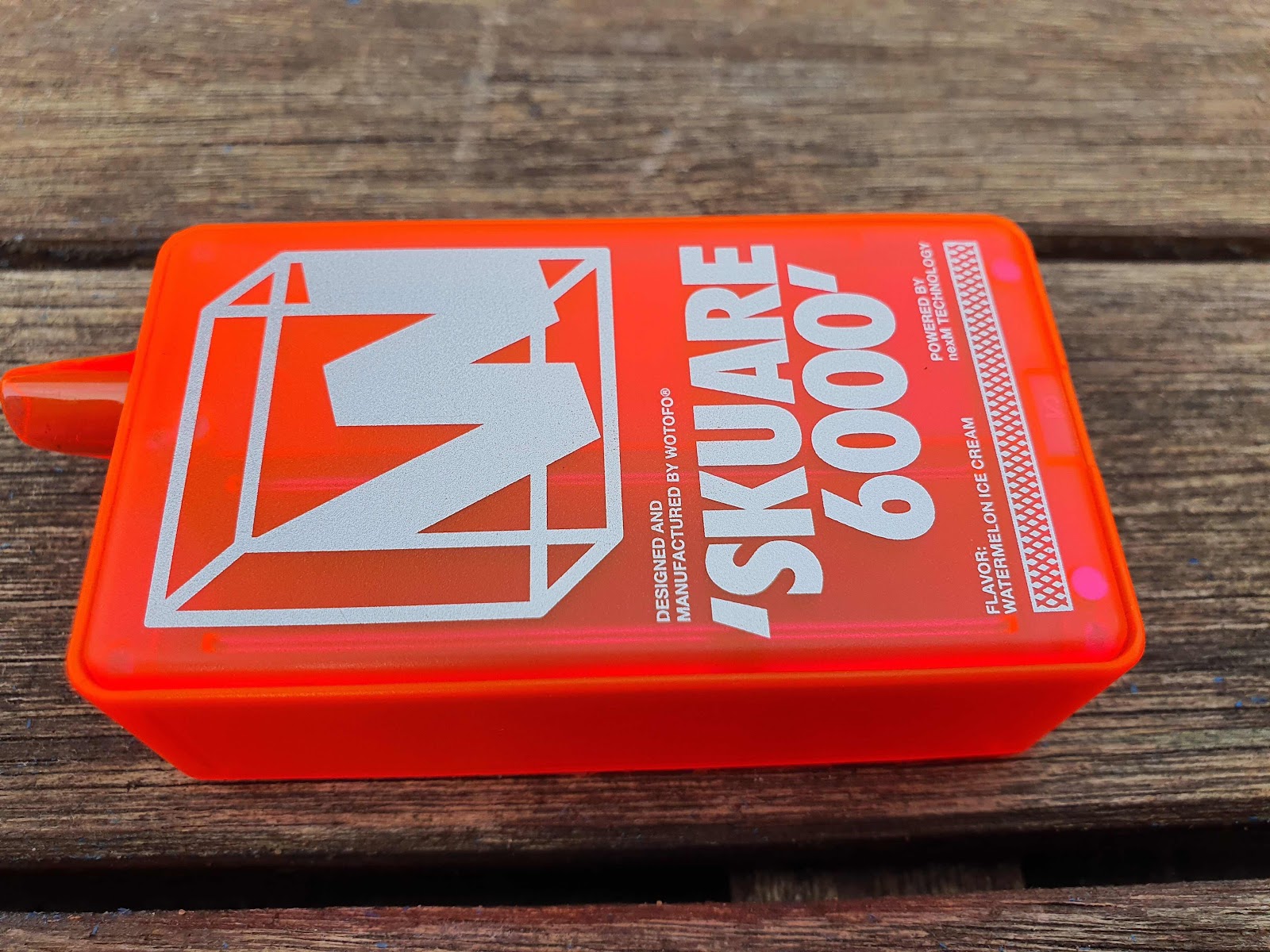 Although I do think that companies need to be carefully when they cover disposable products in their branding. to try and avoid the McDonalds effect. when their incorrectly disposed of products end up on the street or floating around the sea, brightly branded, not great for PR.

On the Wotofo website, they seem to indicate that they think that people will look to collect them all like Pokémon. 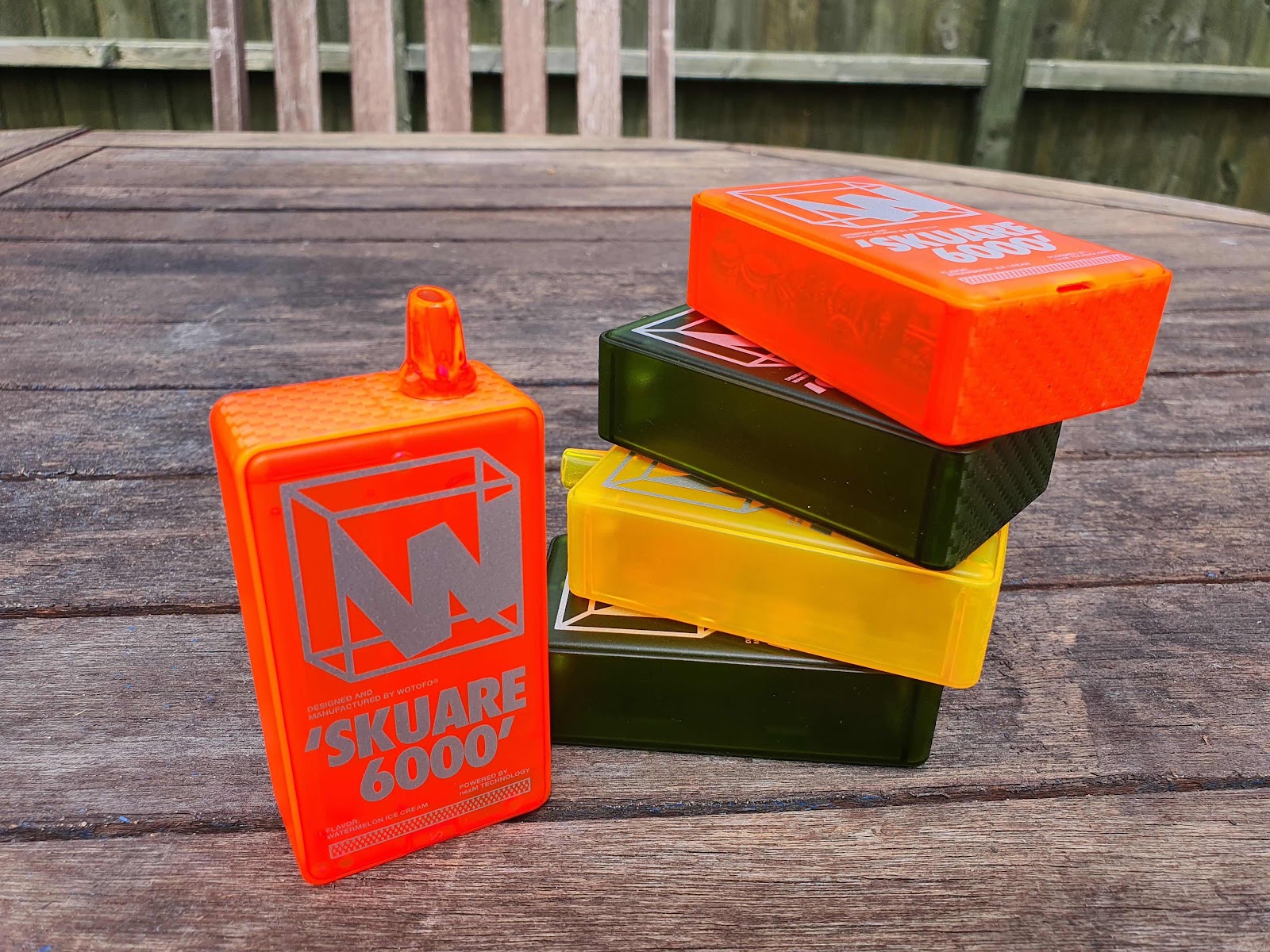 Although the unit itself is throw away after the juice has been used up, Wotofo have manage to reduce the environmental impact of disposal by powering it off a removable / replaceable 18650 battery. to avoid the harmful, and hard to recycle lithium Ion batteries ending up being only used once and then thrown away.  Which in my opinion is a great step forward for pod systems, as I am shocked as to how much waste the vape industry creates with the introduction of of ‘Disposables’ and ‘One-time-use’ devices.

It always seems a real shame that devices such as these just get thrown away, companies like Wotofo need to try and come up with a ‘re-vamp’ sheme, that would allow the pod user to trade the old empty pod in, to be refilled and recoiled. As you are throwing away 90% of the device after use, which is not great.

As we have stated the Skuare comes with a removable 18650 battery, which means that you have the option of charging onboard via the type-c charging port, using one of your own cables, or to continue vaping, you can swap the battery out, and charge it in an external battery charger.  The battery is nicely hidden behind the plastic door, and held in place by the terminal spring’s, i must say that the battery ddor magnets arent that strong, although they do the job required. 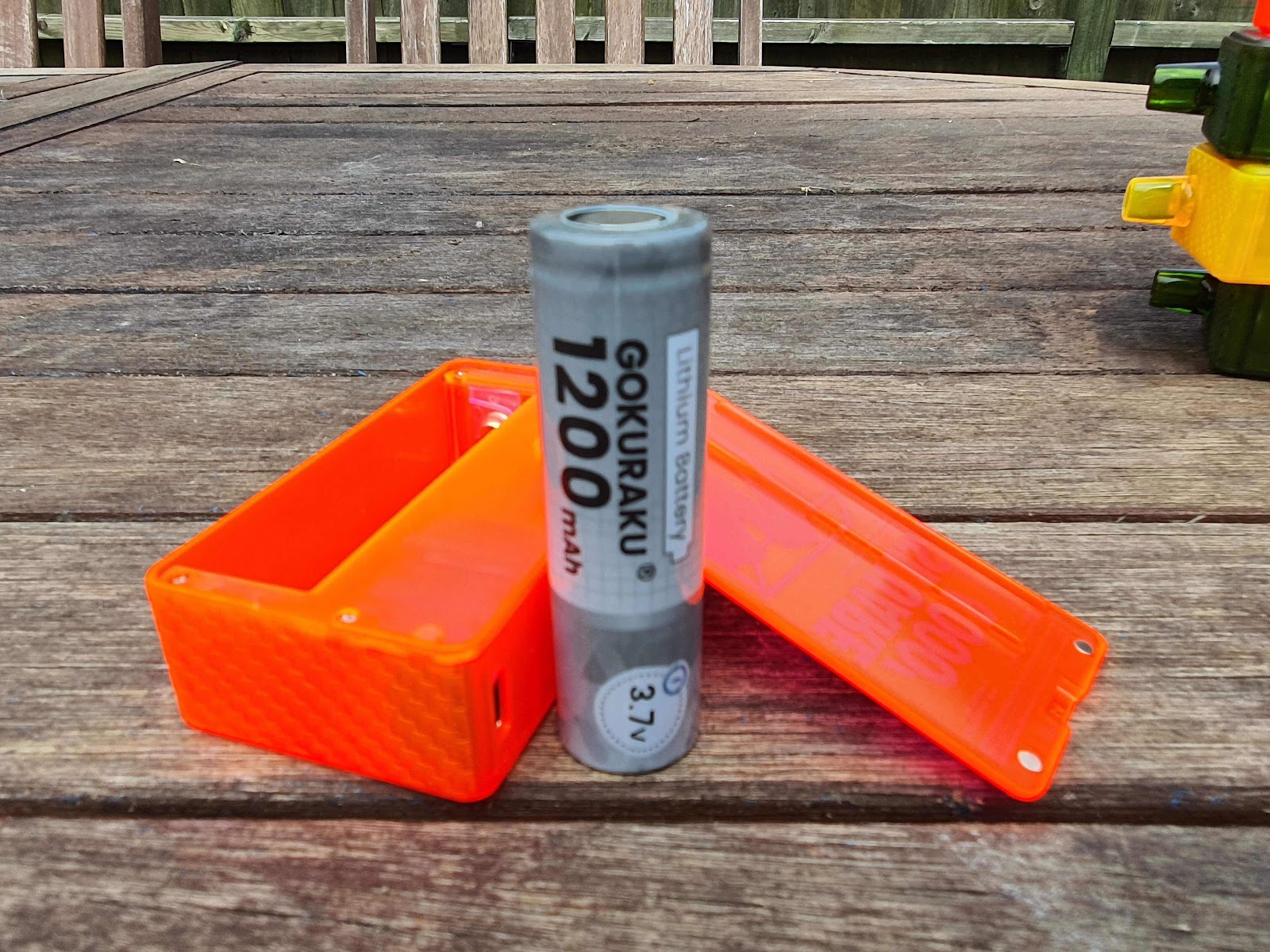 With the lack of a battery tab, you need to hold the device upside down, and give it a good firm tap on the back to get the battery out.

The other stand out feature of the Skuare over other pod systems is the quality of the flavour, this depth of flavour is archived through the partnership with nexMESH, as each Skuare Pod, comes with a nexMESH coil preinstalled. which allows the Skuare to deliver a Pure, Clean, precise flavour, on every puff. all 6000 of them.

Sitting on the top of the carbon effect top section, is a removable oval mouthpiece,  which i must admit it super comfortable on the lips, as i really like the way you can turn in to suit the style of vaping, and how you are holding the device. 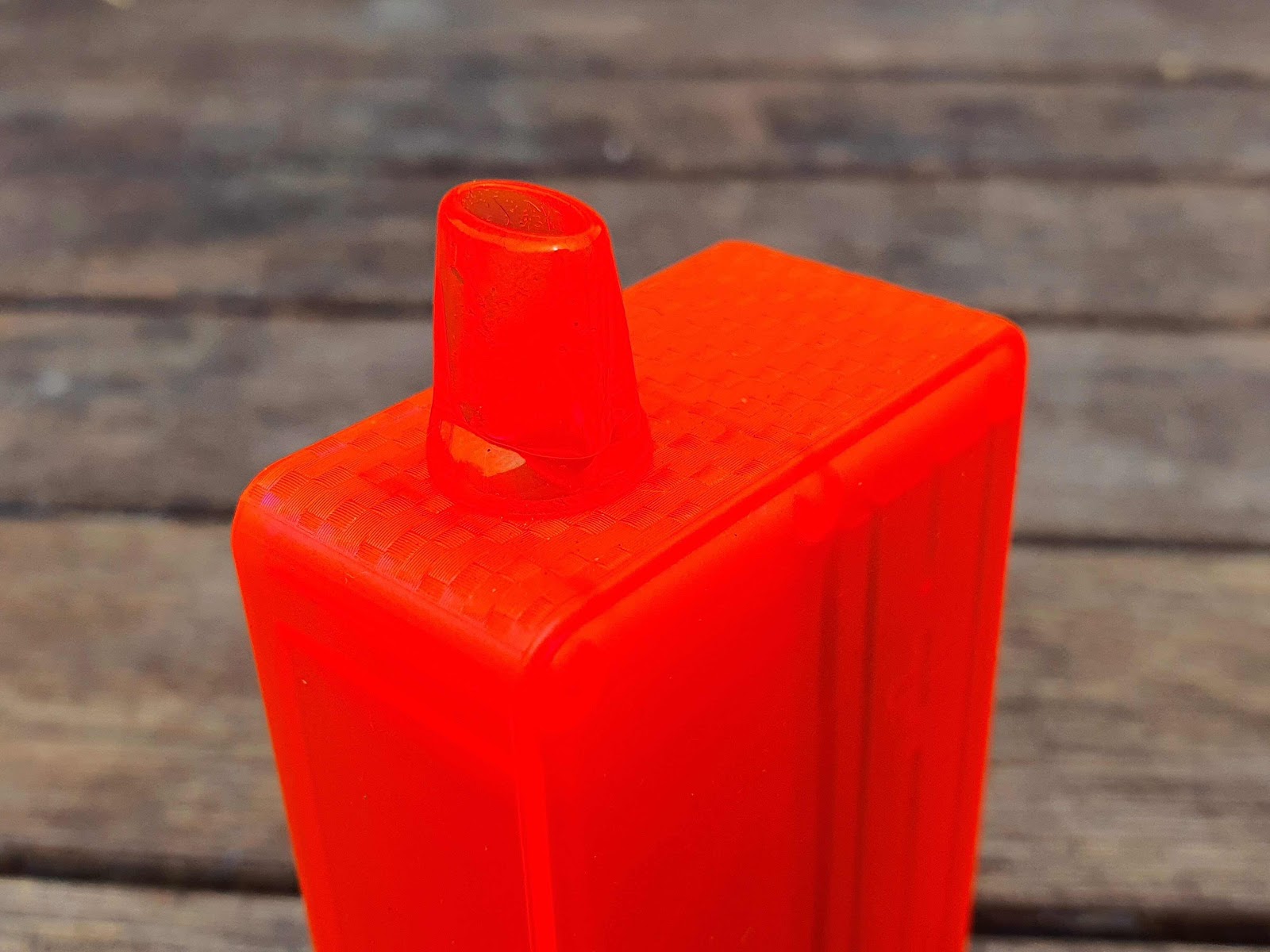 Just because the Skuare is disposable, Wotofo don’t compromise when it comes to safety, with a number of built in safety features.

Over the last few months I have found myself using pods more often, as easy to grab and go, but always found them a little lacking in the flavour department, and always seem to go flat, just when I need it.  That was,  until I starting using the Brightly coloured boxes that my friends at Wotofo sent out.  I liked the fact that if I was unsure on how much charge I had, I could just stick a new battery in, and ready to go. 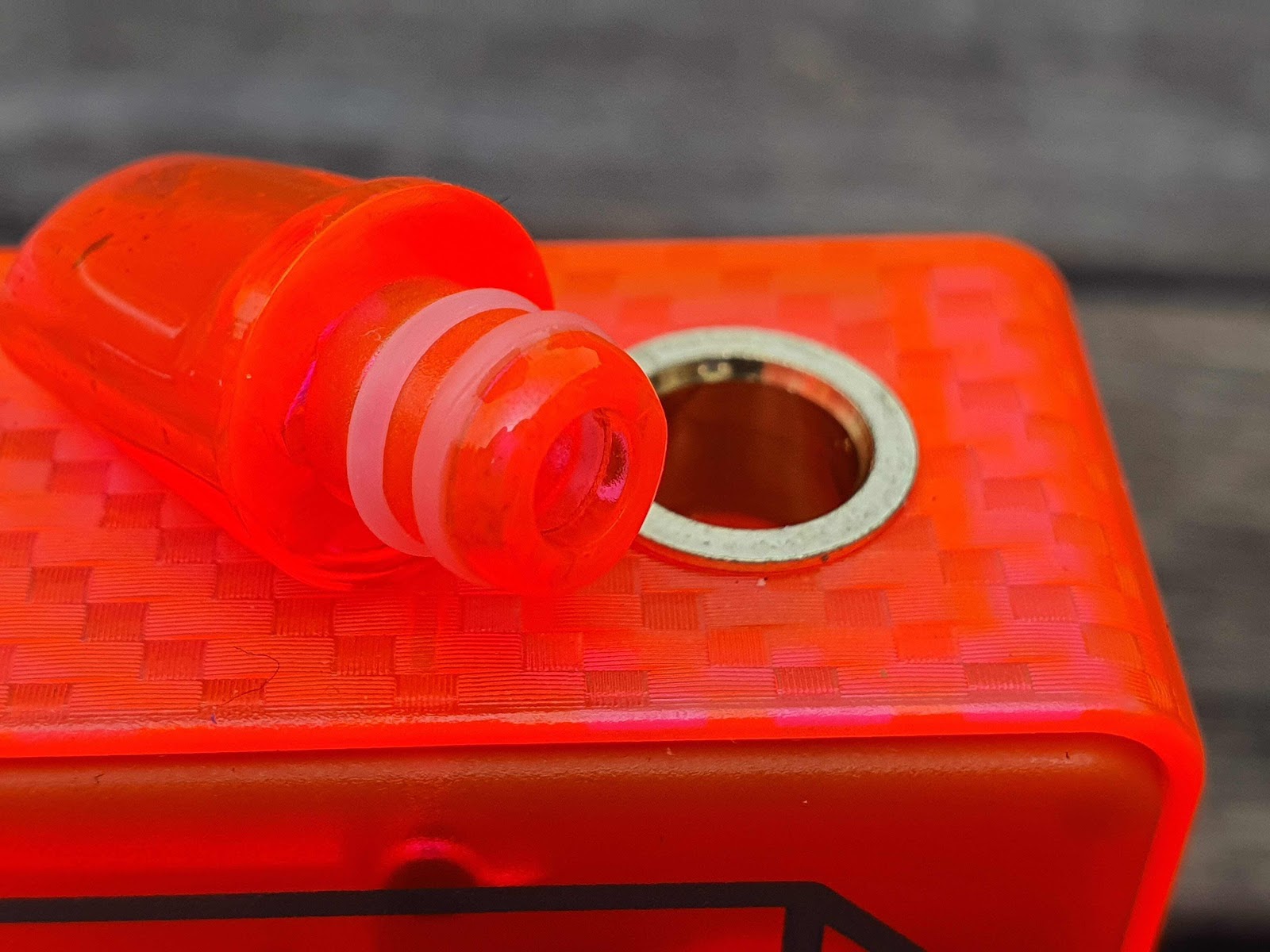 As far a flavour goes it was absolutely spot on, and seemed to last all the way through the full 15ml. The fruity blends seemed to really pop, and the cooling Icecream edge, gave you real brain freeze. Apart from the flavour, the other standout on the performance, was the amount of vapour that they put out, more in keeping with a mod, than a pod. Especially with a fresh 18650 installed. I think my favourite flavours out of the selection they sent just had to be the unusual Water Melon Icecream. With a cooling watermelon candy taste to it, that seemed to really pop on the tongue. I think I would go as far to say that the Skuare produced some of the best flavour, that I have managed to get out of a disposable pod. It just seemed a shame to have to throw away such a good little flavour machine. 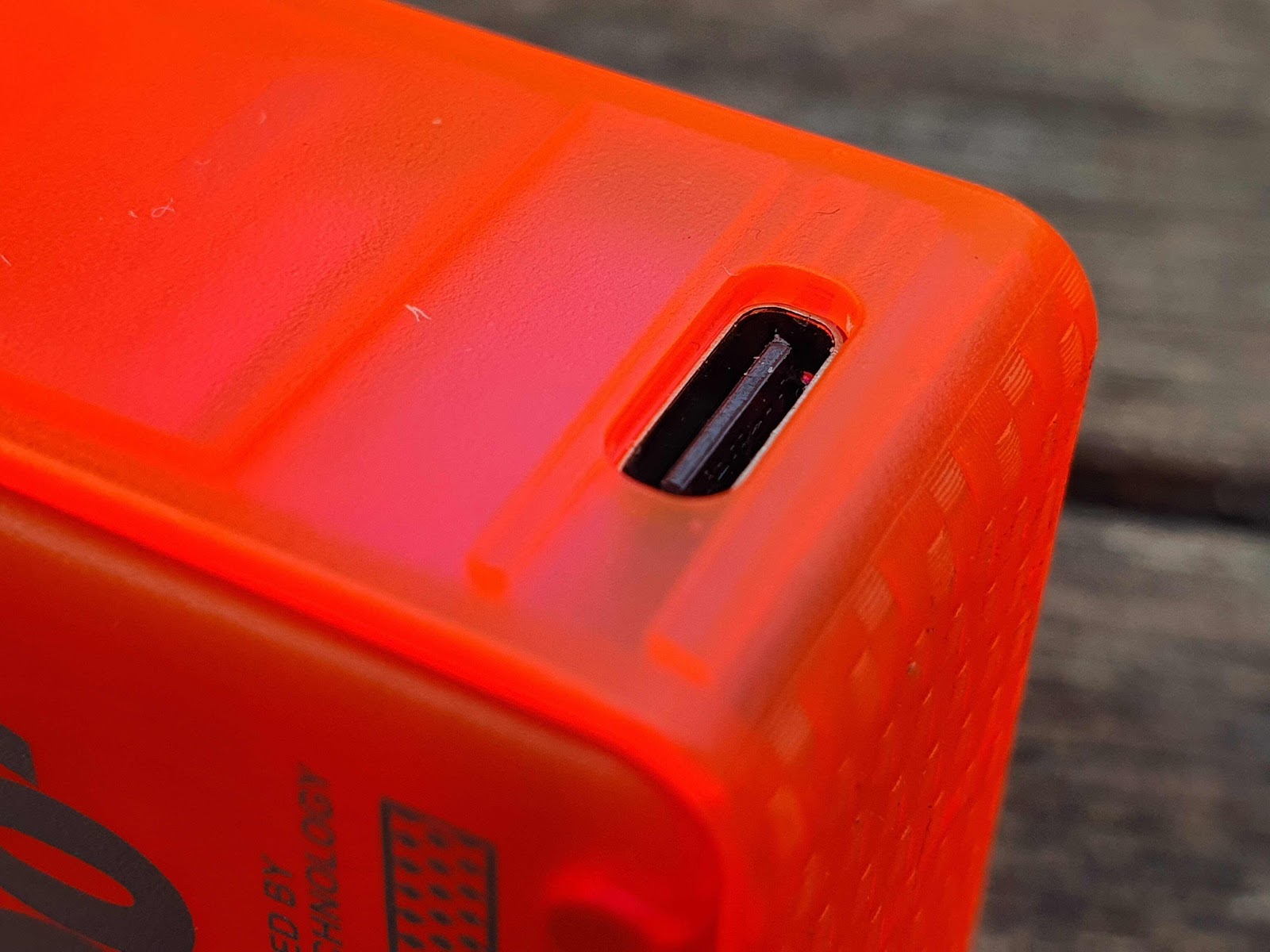 6000 Puffs? Although I didn’t sit and count each puff, and with no puff counter, but it didn’t really feel like 6000 puff, or maybe it was, and I just chain vape to much, as I tended to find than a new Skuare would last me about 2 1/2 to 3 days. And I felt a bit bad thinking that I took 2000 puffs a day. Is that chain Vaping? Or maybe I just take longer drags. Some times I couldn’t work out if I had run out of juice, or if the cotton was cooked. Due to it being a sealed unit, there is no way of knowing how much juice you have left, in either ml’s or puffs.  Would have been nice to have a juice level window. As they would always run out at the worst possible time. But saying that, they lasted 3 times longer than any other disposable pod.

I was unsure if I should even include any comments on the build quality, as it is a throw away item, but saying that it does cost you nearly $25. So I think you do expect a good build a feel. To be honest, they where better than I thought they would be, and really liked how they felt in the hand. Although, as expected it does feel very plasticity, and being hyper critical the battery door is quite loose, and does rattle a bit, and a battery pull would have been nice.

Was really quite impressed with the Wotofo Skuare, great flavour, plenty of dense thick vapor, and the go to 18650 battery. Just not quite sure on the price? As $25 dollars initially seemed quite expensive, but when you consider that it will last 3 times longer than a normal disposable vape, such as the popular Elfbar 600 puff, is about $7.   So when you work it out, with the Skuare, you get 600 puffs for $2.49, compared to the Elfbar at $7. So the Wotofo Skuare 6000 is great value, when it comes to a disposable vape. 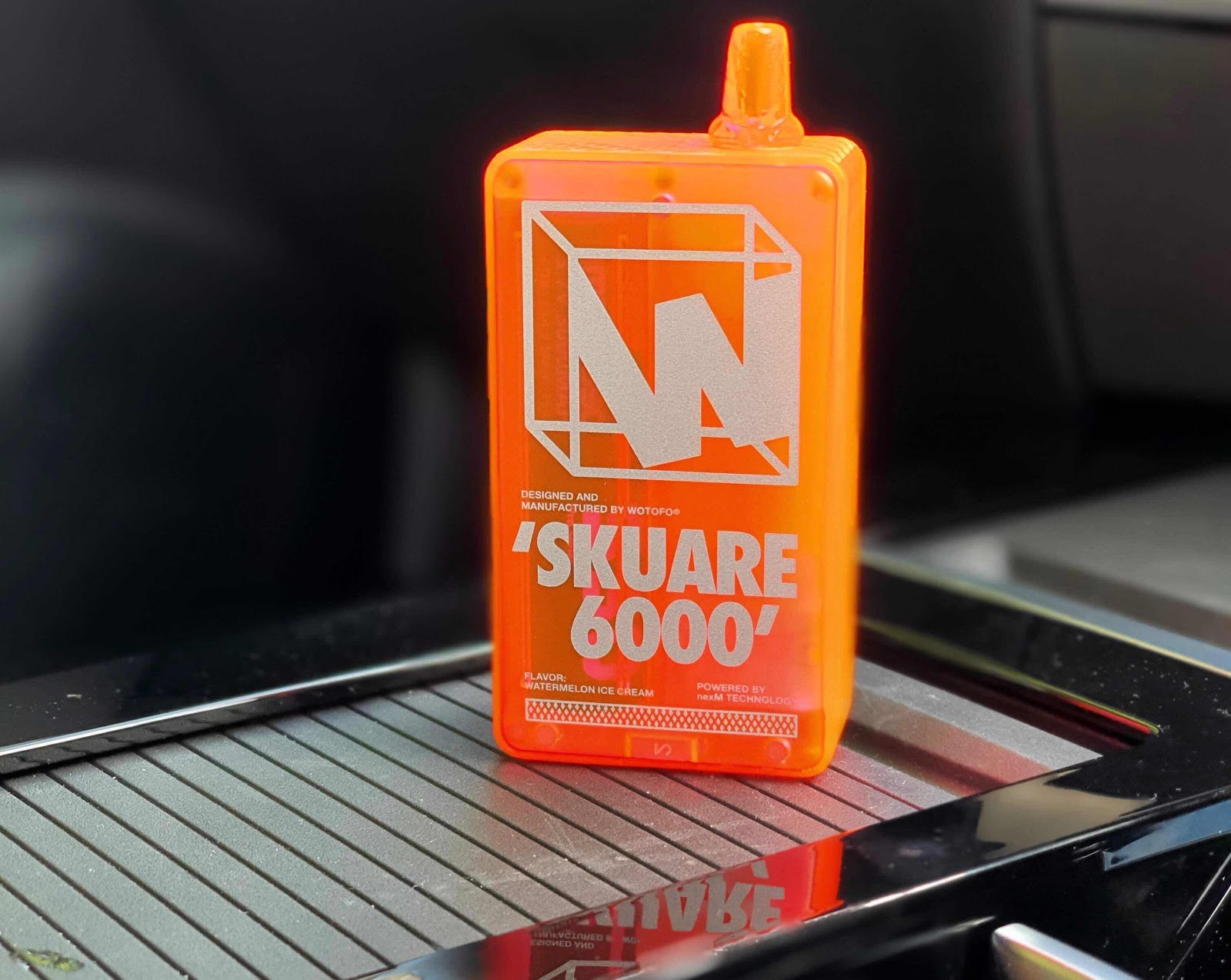 What’s inside the Wotofo Skuare 6000.

Although not part of the review, I’m always interested to see what’s inside the closed pod system, and with the Skuare Wotofo make it really easy by having four small Philips screws, which once removed gives you access to the ‘sealed’system. Interesting how the use a sponge to hold the 15ml of liquid, with the coil in the bottom, similar to the old Cartomisers that I use to use, the coil is a simple Mesh coil, with a single cotton wrapped around it. With the LED at the Base, so in theory, you could easily fill it back up with juice. By either opening it up, or laying it on the side a putting juice down through the drip tip.

PLEASE NOTE MVR DOES NOT RECOMMEND OPENING UP ANY UNIT THAT IT MEANT TO SEALED. 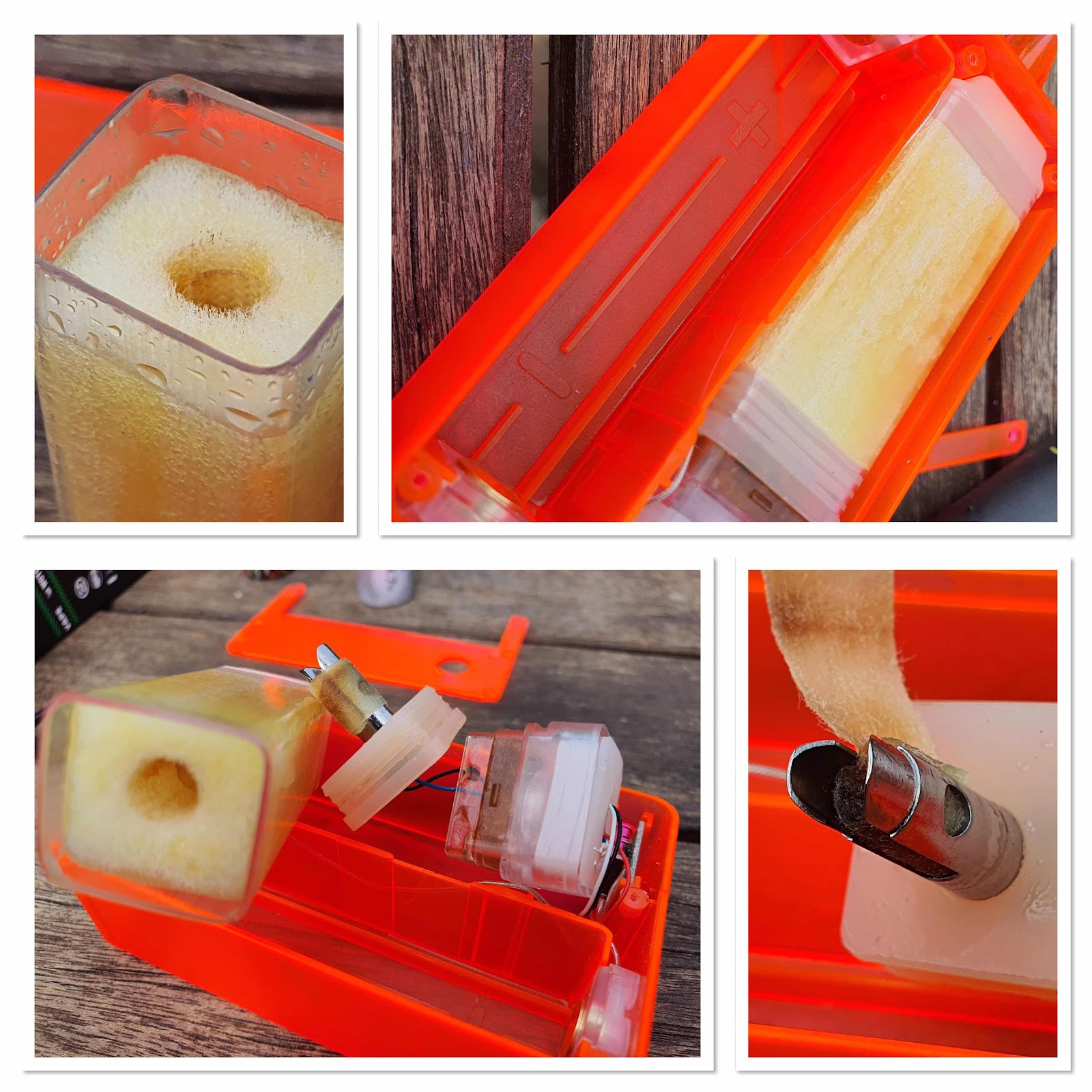 V-Dub Vape Reviews: The RVTA by Smkon: This device was sent to…